Synopsis:  Investigator, Sam McKee, likes to spend his holiday time beach-combing for jade and other artifacts on New Zealand’s rugged West Coast. But when he stumbles across a strange man digging a grave up on the river flats and then spots the same man staring at a pretty young girl in the local village, his holiday plans are thrown into chaos.

Lydia wants to leave Mr G, but she doesn’t have a safe exit strategy and Mr G isn’t the sort of man a girl says no to. Mr G wants it all. His brothels make him plenty of money, but that’s not enough. His property empire, held together with blackmail and extortion, is under threat, and he will do whatever it takes to keep it.

Sam will need all his skills as an investigator, diplomat, and gambler if he’s to satisfy a violent egomaniac, especially one who’s out for blood. Can he save the life of someone who’s just made a stupid mistake without risking his own, or will he end up buried Above High Tide?

Look inside for a free preview >>> 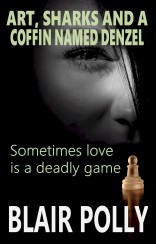 Synopsis: Alex is a sculptor with big dreams and an over-active imagination. When he meets the gorgeous Lisa, he can’t believe his luck, but Lisa has a secret that threatens not only her budding relationship with Alex, but the lives of Alex’s friends as well.

A humorous insight into the workings of a creative mind. A story of friendship, love, courage and how valuable time becomes when it’s about to run out.

A suspenseful and emotional roller-coaster that has an ending you won’t expect.

Look inside for a free preview >>>